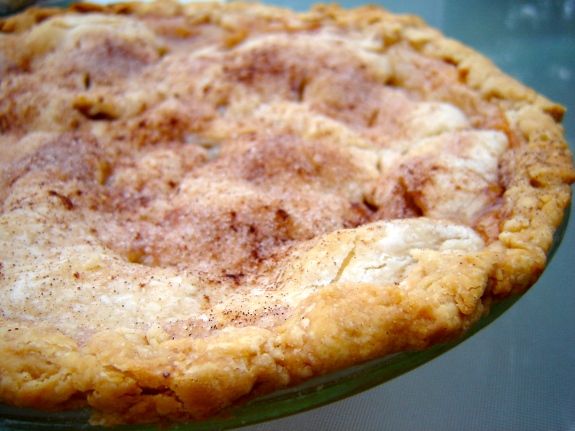 My Grandma taught me that a good crust is the secret to a good pie, and I have to admit, I think she’s got a point.  Flaky, not-too-dense crusts thats that don’t overwhelm the filling but complement it to perfection…that’s what we’re aiming for.  After watching her for years and then making my own, I’ve realized that it’s not nearly as difficult as it seems!

Here is the basic recipe for a double pie crust that I’ve gleaned from the pie queen herself:

The keys to doing this crust successfully are the right fat, the right dryness, and a light touch (no overworking this stuff).

In a medium bowl, mix the flour and salt.  Then add about 2/3 cups lard–this once unpopular fat is what gives the crust a flaky texture.  Using a pastry cutter (or fork), work the lard into the flour until it is mostly in pea-sized chunks.  There will still probably be some excess flour.

Then dump in 5 Tablespoons of water (this is not a science but a starting point, so you don’t have to measure perfectly).  With a fork, lightly mix in the water.  Think of it like you’re gently encouraging the mixture to stick together.  It will most likely seem pretty dry, but that’s good!  You know you’re done when you can lightly shape the dough into a somewhat crumbly ball and there is only a little flour in the bottom of the bowl.  If you’re not quite there yet and it completely crumbles apart, add a little more water.

Divide the dough in half and sprinkle flour on the counter.  With a flour-covered rolling pin, roll out one half (I like it at about 1/8 inch thick) and place in a pie pan.  Use a little water like glue if you need to patch it.  Put in the fillings and roll out the top half.  squish the sides together and set aside (or toss) the excess dough.  Sometimes I have enough left over for another single pie crust…great for quiche.

Stay tuned for specific recipes to use with this crust (and possibly a video demonstration)!